Just wrapped up an interview with CNBC for its documentary news feature on PepsiCo. The hourlong piece will dedicate one of its roughly 10-minute segments to "The Real Pepsi Challenge." Looking forward to the interview with survivng team member Alan McKellar in St. Louis, as well as with Becky Boyd, daughter of the late Pepsi team chief, Edward F. Boyd. I'll be featured as well.

"The Real Pepsi Challenge" didn't win any awards but it did garner huge honors. The first is obvious: allowing me to meet seven of the original members of the World War II-era Pepsi sales team that broke down color barriers in Corporate America. It was an incomparable and enriching experience, and way more fun than you would guess.
It was also my great honor to eulogize team leader Edward F. Boyd, along with Mayor David Dinkins and others, from the pulpit of Riverside Church after he passed away April 30, 2007. Mr. Boyd was remembered in dozens of obituaries worldwide.﻿
﻿﻿﻿﻿﻿﻿      The latest honor came just this week, when the Smithsonian's National Museum of African-American History and Culture officially accepted into its selective permanent collection the 144-item archive that I had diligently amassed over several years before and after the writing of the book. ﻿﻿﻿﻿﻿﻿﻿﻿﻿﻿﻿﻿﻿﻿﻿﻿﻿﻿
﻿﻿﻿﻿﻿﻿﻿﻿﻿﻿﻿﻿﻿﻿﻿﻿﻿﻿﻿﻿
﻿ ﻿﻿﻿     Among the material: I managed to collect 12 of the 13 original 1940s Ebony magazine ads critical to the early development of the concept of niche marketing. I also was delighted to have acquired the half-dozen letters and a training brochure written by Mr. Boyd at Pepsi during his leadership of the then-named Negro Market team, as well as the family archives of Philip Kane, of the second pre-war intern team at Pepsi. The Kane archives, respectfully kept by the widow and children of Mr. Kane, included everything from his 1941 paystubs and expense reports to rare photos and clippngs. I also appreciate the kind donation of former adm

an Adrian Hirschorn of a 1949 article he wrote for Printers' Ink trade magazine about the trailblazing Pepsi effort.﻿﻿﻿﻿﻿﻿﻿﻿﻿﻿

I am indebted to the Queens Museum of Art and to Pepsi diversity chief Mauice Cox for helping me realize the full potential of the archives as an exhibition and as a permanent collection. I guest curated a popular show at the QMA in 2008.﻿﻿﻿﻿﻿
﻿﻿﻿﻿﻿﻿        It is a fitting tribute to the groundbreaking and visionary work of the Pepsi men that their legacy be preserved in America's finest museum. The African-American history museum is set to be opened in Washington about the year 2014, so stay tuned.
Posted by Stephanie Capparell at 8:48 PM 5 comments:

The Ronald H. Brown building at the U.N.

On Tues., March 29, President Obama visited NYC to dedicate the U.S. Mission to the U.N. to the late Secretary of Commerce in the Clinton administration, Ron Brown.
It is a remarkable honor for someone who was never an ambassador. Rather, he was honored, Obama said, because "he embodied the values and the ideals," of the U.S., and the U.N., during a lifetime of counseling disadvantaged kids, fighting for workers and helping minority businesses.
"The American Dream, he always believed, rightfully belongs to every child in this nation," the president said of Mr. Brown.
Ron Brown began doing his part to ensure that dream was inclusive from an early age. The boy on the jacket of "The Real Pepsi Challenge" is Ron Brown. He was the son of William Brown, the manager of the Theresa hotel in Harlem and a friend of Pepsi sales chief Edward F. Boyd. Mr. Boyd decided to cast the handsome young man in a point-of-purchase ad for his Negro Market effort.

The resulting tableau--starring one of the first black professional models, Sylvia Fitt--showed a happy, comfortable middle-class American family enjoying that American Dream. It was a rare image in marketing campaigns in any media in the late 1940s. Mr. Boyd joked that friends of the family had worried the young and precocious child who ran around the hotel lobby and bar "would come to no good." The young Brown proved their fears groundless when, to everyone's surprise, he was poised, cooperative, and professional during the entire shoot.
Ron Brown cherished the ad, and kept it on display in his office in Washington. After he was killed on a trade mission to Croatia in 1996, his mother returned the ad to Mr. Boyd. You can see the jacket cover below. Here is the full ad:
Posted by Stephanie Capparell at 6:37 AM No comments:

﻿﻿﻿﻿      A tip of the Pepsi bottle to PepsiCo's Black Employee Assn. and its Diversity department, under the leadership of veteran chief Maurice Cox, for their excellent Real Pepsi Challenge website, based on my book.

﻿       Browse through the photos, hear the narration, listen to the music, and get a copy of the book for your e-reader.
Enjoy!﻿﻿ ﻿ ﻿﻿﻿﻿﻿
﻿﻿﻿ ﻿﻿﻿﻿
Photo courtesy of Allen L. McKellar, Pepsi-Cola Company's pioneering African-American intern, hired along with Jeanette Maund in 1940.

Posted by Stephanie Capparell at 7:45 PM No comments:

THE REAL PEPSI CHALLENGE: The Inspirational Story of Breaking the Color Barrier in American Business

By Stephanie Capparell
This book tells the riveting story of some of the first African-American professionals to enter Corporate America: the all-black Pepsi-Cola sales team that sold the soft drink to the so-called Negro Market, beginning in the 1940s. It was the dawn of niche marketing and these professionals--the department had 12 men at its peak in 1951--helped define it. These were business pioneers in ways that went beyond issues race. They helped modernize WWII-era American advertising and democratize U.S. business.
Substantial Films Inc., is offering rights to the book for a film or for a television mini-series. It is a story that has to a be told: a bold, early chapter in the civil-rights movement---the move to recognize African-Americans' competence at every level of employment and their economic power.
The Pepsi marketing-team member, led by the onetime Hollywood singer and actor Edward F. Boyd, were the black Mad Men, as my readers often like to point out to me. It's the prequel to the popular show, with the men having entered Madison Avenue some 20 years earlier. They were just as smart, just as sassy, just as  creative, and just as popular with women as their fictional counterparts.
But their problems and challenges weren't self-inflicted. They were traveling salesmen in the time of vicious and chaotic U.S. segregation laws, forced to sit at the back of the bus, dine behind curtains on trains, stay in separate hotels and avoid most restaurants. One of the salesmen, Alexander Jackson, who was ordered to move to the back of a bus during a Southern marketing campaign was a Harvard graduate, the son of a Harvard graduate, and the brother of a Harvard student. The experience was devastating and he left the team.
﻿﻿

﻿﻿       This is no rags-to-riches tale. There are no victims to patronize. These men were well-educated and polished, part of the black elite that had emerged a mere two generations after slavery. Others in their circle started lucrative businesses in the black community and lived comfortable, affluent lives in segregated America. But these men were after a slice of the real economic and political clout of the newly booming corporate world. They had everything to lose as they ventured into new territory, demanding integration, opportunity, and professional recognition on the broadest scale. The men helped to push open doors in the work force, but it wasn't entirely a happy ending. In the end, the team members gave more than they got, and most left their corporate careers for other fields, continuing to break down barriers in international relations, journalism, education, medicine, and fund-raising.
One salesman, however, did see the story to its inevitable conclusion. Harvey C. Russell, who joined the sales force in 1950, became in 1962 the first African-American promoted to vice president of a major corporation when PepsiCo named him vice president for special markets. 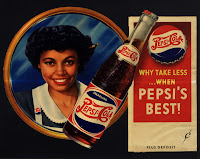 “ To the ranks of the unsung  civil rights pioneers, add Pepsi’s first special-markets sales staff. Instead of schoolrooms or lunch counters, their struggles and victories took place in offices, storefronts, and factory floors.”
---‘The Real Pepsi Challenge’
Posted by Stephanie Capparell at 8:03 AM 1 comment: